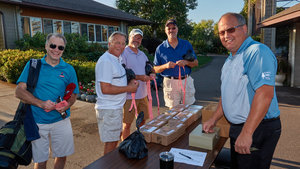 I started my journey at MultiTech after being laid off from a job I had had for about five years. Northwestern Electronics Institute, where I got my degree, had a placement program I had initially used to get my first job. I went back there and saw MultiTech on the list of companies that were hiring. I applied and was soon hired as a Bench Technician in Manufacturing, mainly testing and repairing boards.

I spent a few years doing that and then transitioned to a role in engineering as a Firmware Test Specialist. In that role, there was a little more customer contact, a little more interaction with different departments. That’s what I loved about that role. It allowed me to still work as a liaison with manufacturing. That’s one of the reasons why I was brought in. They thought it would be nice to have a liaison from Engineering to Manufacturing. It was something that was kind of missing at the time.

From there, I moved to Component Engineering under Quality Control. The one thing about firmware testing that changed for me was that I wasn’t really involved with the hardware as much. I realized I kind of missed that and I thought for me it would be a good change to go back and look at hardware of the product and design of the product more. That really has been a catalyst for me.

Moving into that role as a Component Engineer allowed me to work with even more departments. Approving components requires sign offs from various areas and communication with sales, product management, manufacturing and engineering. Moving to that role allowed me to take on even more roles in the company.

That's one of the best things about working here. MultiTech has always felt like it was a place where, if you wanted to go up and talk to the owner, Raghu Sharma, you felt like you could do that. You could walk into anybody’s office. For me, I took advantage of just being able to talk to the engineering staff or sales staff. The more you get yourself out there, the more people realize, “Hey this is someone we could transition to different roles.” The company has been really great in allowing movement throughout the company.

Also, MultiTech has always given us all the tools to succeed. We just have to tell our leadership, “This is what we need.”

One of the things I've realized in speaking with people who work with other companies, is that something that we take for granted here are the celebrations of successes. There’s obviously monetary promotions and pay and that drives a lot of people as well, but to have that recognition by the company to the entire staff of our successes is one of the things I love about working here. I’ve been with MultiTech for 26 years, so obviously, I love the place. With just the time served, that goes without saying.

It’s a technology company, so I think our ability to transition to the different technologies has made us successful over the years. We went through a transition from analog devices to concentrating on RF Cellular Product. We wanted to concentrate on industrial, yet find the technology we needed to focus on because we knew that dial-up was eventually going to end. Dial-up was not where the industry was going. I think MultiTech’s been really good at figuring that out and bringing in the right people to do that.

We’re really busy right now. Our Gateway product is the best in the business. I’m really excited for the future. Our marketing and sales staff, remote and internally, have done a fantastic job of getting the word out. I’m excited about that product and the continuing technologies that are associated with that.