The first part of my career was with a systems integrator. Then I ha 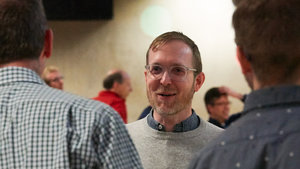 d an opportunity to work for a distributor for several years, but I had always wanted to work for a manufacturing company in the technology space. At my previous employer, my VP of sales had left and came over to MultiTech. Within the year, he reached out and said, "Hey, there are some sales engineering positions open at my company called MultiTech, which I am loving working for." They offered me a position, accepted, and have not looked back since.

What I love about working here, which I'm sure a lot of us have been saying, is the people. I have tremendous respect for the leadership team and my boss. Everyone is extremely knowledgeable and willing to help each other out. It's a great team effort here at MultiTech.

The first three years, I was a Field Application Engineer, working as a technical resource supporting the sales teams. But in 2011, management asked if I'd be interested in a sales role. They thought I'd be successful at it. I jumped at the chance and have been in various sales roles since.

I enjoy traveling. So I love the opportunity to get outside of the building, meet customers face to face, and see how our products used in real-world scenarios. I also enjoy assisting companies with problem-solving, collaborating ways to create new revenue streams, or consult on new product ideas.

The biggest win in the last year that was exciting for me: MultiTech is focusing on the oil and gas market. We have a wireless technology called LoRa that we started working with four or five years ago. We had the opportunity to work with an oil producer that was trying to connect 18,000 wells. We got a commitment from them, won that business, and are helping them monitoring oil fields in the western part of the U.S.

One of the things that makes us so successful is our innovation with new technologies. The company initially focused on analog, but in the early 2000s, MultiTech got into the cellular space and realized we could connect up machines, devices, and computers over wireless and cellular versus analog dial-up. Then in the last five years, we've gotten into a Low Power Long Range technology called LoRa. The company has always made the right decisions about when to move and switch to a new technology. With our analog business winding down and our wireless business growing, we're going to have continued success.

Anybody in the company, but particularly engineering, sales and marketing, has to continually learn the new technologies that are out there, what technologies we're implementing into our products, and becoming subject matter experts. We're always working with our customers, meeting with them and continually educating them on these new technologies. That's a never-ending thing. That's the exciting thing about working for a technology company; you're never bored. Throughout your whole career, there's always continuous education. If you're not doing that, you're going to fall behind.

The ramp-up is getting faster and faster with new technologies today, especially in the wireless space. Things are moving and changing quickly. Now it's almost a daily thing that you've got to be reading or educating yourself on the next thing that's coming out.

It's difficult to have that crystal ball to predict the next thing that's out there. For cellular, for example, we're at the mercy of what the carriers are doing, the new technologies being released and making sure we're keeping up. The key to MultiTech's future success is being able to spot those new technologies that are coming out, knowing which ones to jump onto, and start building strategy and products around it.

MultiTech is a great place to work, I enjoy coming in every day, and the people are awesome. It's nice to work for a mid-sized company that gets to work with big players in the marketplace.