What is an IoT Gateway?

If you or your company has invested in expanding your use of Internet of Things (IoT) devices, you may have noticed the term "IoT Gateway" popping up more and more frequently.

But you might also have questions, including: what is an IoT gateway, what is the use of a gateway in IoT, and -- most importantly -- should you be investing in them?

Definition of an IoT Gateway

At its simplest, an IoT gateway is an intelligent central hub for IoT devices. IoT gateways connect devices within the Internet of Things to one another and to the cloud, translating communication between the devices and filtering data into useful information.

A true IoT gateway contains communication technologies connecting end-devices (sensors, actuators or more complex devices) and backend platforms (data, device and subscriber management) to the gateway. It has a computing platform allowing pre-installed or user-defined applications to manage data (for routing and computing at edge), devices, security, communication and other aspects of the gateway.

Some of the most common uses for IoT gateways include:

Whether your company is ready to invest heavily in IoT or wants to start with a few devices here and there, getting set up with IoT gateways will provide immediate and long-term advantages.

Connecting Devices to One Another and the Cloud

Think of IoT gateways like universal remotes. While you can have different remotes that all work with different devices, a universal remote allows you to control all of them from a central location, saving you time and effort. Without IoT gateways, your devices still work and can be controlled individually, but it’s more of a hassle and they can’t be programmed to work together.

As a centralized hub, an IoT gateway provides a single location where data is communicated to and from devices. This communication comes from other devices and users via the cloud. When you receive information or provide information to an IoT device—such as a change in protocol—you’re communicating with these devices through IoT gateways via cloud-enabled software.

IoT gateways are also able to connect to one another to streamline and expand their functionality throughout a physical location and in use with a growing number of IoT devices and smart sensors. By installing universal IoT gateways early in your technology plan, you can add devices seamlessly while saving time and effort.

Although IoT devices are rapidly becoming a part of our everyday, with new products and services popping up all the time to aid in just about every aspect of our lives, standards for a common language between devices does not yet exist.

For example, while your office may have motion-sensor-enabled lighting and climate control, the lights and climate control are unlikely to be able to communicate with one another unless they are manufactured by the same company—or, unless you have IoT gateways translating information between them.

As more IoT devices are added, the more important hubs become in simplifying how they work together.

Not only does IoT gateway allow your devices to speak to each other, but it simplifies the ways in which your IoT devices communicate by filtering data into useful bits of information. Because IoT devices can record new bits of data in a fraction of a second, seeing every record would be unhelpful and bog down how quickly the devices can work and communicate. IoT gateways are intelligent and able to work at the edge, meaning each gateway can think about and comb through the data provided then only send the necessary filtered data to the cloud, improving communication and response times.

As IoT devices expand, so do the security risks against them. You’ve likely heard horror stories of the Internet of Things run amok, including Wi-Fi baby monitors allowing hackers to listen in or smart cars going rogue. The ability for outside influence and hacking is possible with all IoT devices—but an IoT gateway provides another layer between the internet and the device itself. Even if your company isn’t going to be investing heavily in IoT, a gateway enables further investment in the future while providing extra security for IoT devices you already own.

Intelligence at the Edge 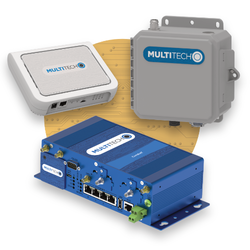 MultiTech is a leader in developing and manufacturing cutting edge IoT devices and the electronics you need to have to get ahead in business today. Our IoT gateways are the latest in tech innovation and one of the centerpieces of our suite of products. If you’re ready to see what IoT gateways can best help you and your organization, check out our extensive portfolio.